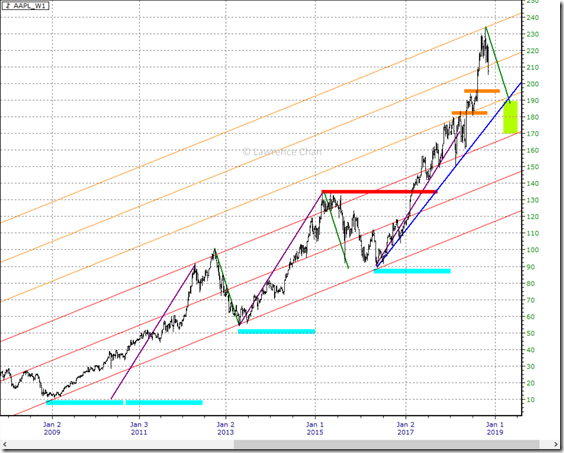 1. Apple has 3 major runs higher since the year 2009 bottom. If we label the middle one as one unit of time, the first rally took two and the latest one has used one and a half units so far.

2. The current rally started from year 2016 is actually a parabolic run composes of two leg of equal length. Parabolic run often marks an important top or bottom for at least half the time spent on the run. So we are looking at 6 to 8 months consolidation.

3. Last 2 corrections / pullbacks (highlight in green down trendlines) are about 45-50 dollars each, if that repeats, we will see 190.

5. Long term channel structure is intact with Apple completed the 150% expansion. It is normal to move back down to the midpoint of the expanded channel which is around 180 at the moment.

6. Up trendline in blue highlights the current support which is still very far down below.

7. So even if Apple somehow managed to make a new high against the 250% expansion boundary, it is still like to move back down to below 200. Longer it spends its time up there, longer and steeper the selloff will be.